skip to main | skip to sidebar

I thought about writing this post about all the good new climate change reports that have recently come out. The top two in my mind:

...Both are highly promising in their readability and practicality of approach. I could go on.

But instead I'd like to write about a moment that happened on Saturday morning as I entered the crowd at the Nov. 21st NorCal Climate Mobiliation, a march starting by Lake Merritt and ending in a rally at city hall in Oakland, California. This was the first of many marches organized by 350.org around the country to bring attention to the 10 days of climate negotiations in Paris called COP21 (the 21st meeting of the "Conference of the Parties" to international negotiations on limiting climate change), starting Nov. 30th, 2015. 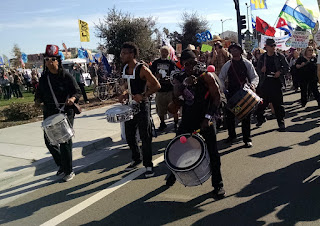 This, above, is Samba Funk, a carnaval drum/dance corps, entering the street at the start of the march. It's not a great photo, but if you look you can see the leader-- King Theo (Theo Aytchan Williams)-- pointing at someone behind me to my right with his red-ball-tipped drumstick. (Read more about this group at their under-construction website, hear them here).

As I stood there, I was struck all at once with the energy of their drumming and the sight of the banner-flags flying, and the "Carbon Tax Me" stickers on everyone around me-- and a lump formed in my throat and a tear came to my eye. It felt like a sob rising in me. I didn't recognize it at first. Yes, that was the "thing with feathers," as Emily Dickinson says.

No number of scientists and media experts sitting in front of their laptops in florescent-lit offices will save us if there isn't also HOPE. Hope, expressed in music, collective dancing in the streets, prayer, high-flying banners that say "Water is Life," and the inclusion and support of movements tangential to the climate change awareness movement-- such as support for refugees: 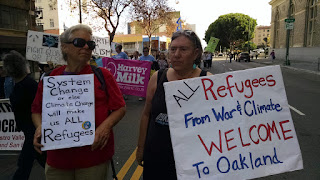 And support for all the ways and reasons to move away from a fossil-fuel economy: 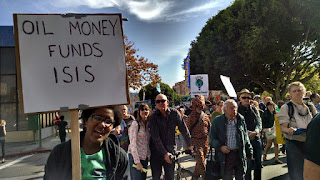 We need all hands on deck, and that moment, being washed in drumbeats, was the first time I thought-- REALLY THOUGHT-- yes, we might be able to get all hands on deck. With the strength of a multi-level/media/cultural/lingual, intersectional movement we might get there.

At least one friend who helped organize the event corroborated my thoughts, that this was a much stronger showing with better representation of different kinds of activists than previous climate marches. She said, "it's catching on."

Especially after the recent series of catastrophic strikes by the Islamic State, this Thanksgiving I am thankful for this past weekend's march and the profound moment of hope it gave me. It will carry me.

I hope my friends and colleagues who are traveling to COP21 in Paris go safely and hold on to their own sense of hope, and dance in the street every chance they get, despite the government's ban on the Nov. 29th Global Climate March.

Some coverage of the Nov. 21st NorCal Climate Mobilization march and rally in Oakland:
Note that estimates of Saturday's attendance varied from this "hundreds" to "thousands" to a specific number I saw on a Tweet somewhere-- 2,450?-- to 5,000 (that from an organizer who said their goal was 10,000). The Contra Costa Times says over 100 groups were represented. 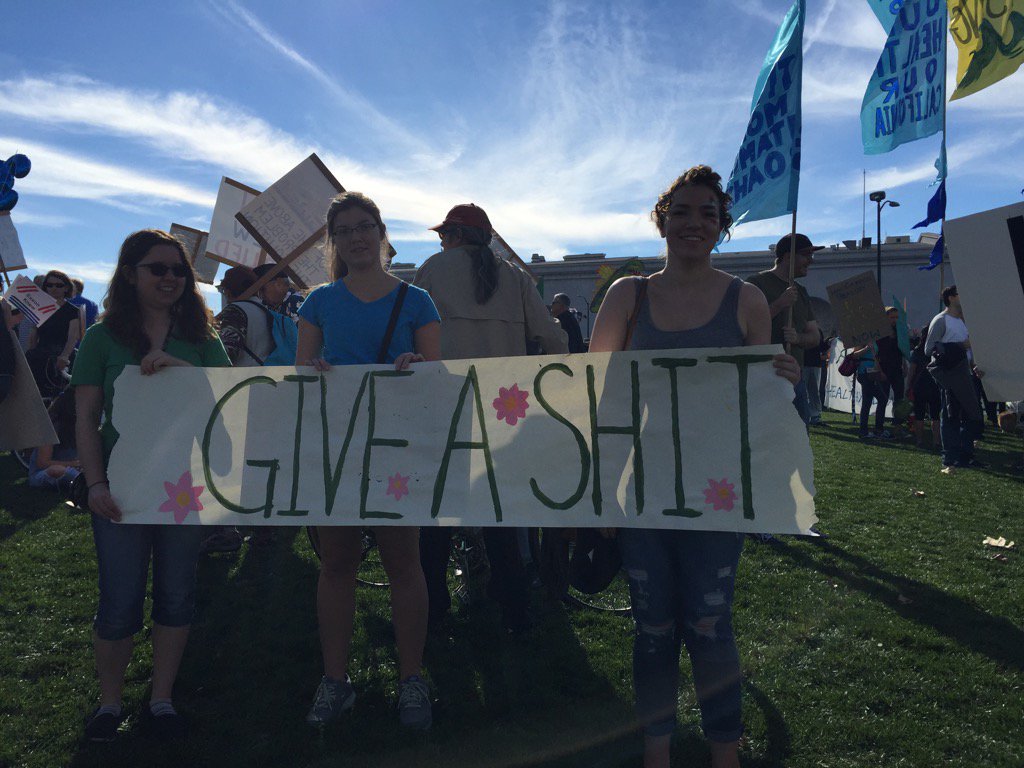 ...a basic tenet of my life. (Photo credit: Green Bean.) With flowers and hearts, I also give thanks to you my readers. Hope you have a happy and peaceful Thanksgiving.

Sara Susanna Moore
I'm a climate change adaptation researcher & Associate Energy Specialist for the California Energy Commission living and working in the Sacramento Area. Opinions are my own. I have written about adaptation innovations for the WWF ClimatePrep blog. I worked on the Sonoma County Adaptation Strategy as part of its Climate Action 2020 plan. Prior to that, I worked on a parks management strategy for Sonoma County's five state parks under threat of closure. I worked at the Zavaleta Lab at UC Santa Cruz 2010-2012 on a component of the California State Climate Vulnerability Assessment (the Third Assessment). In May 2010 I graduated from UC Berkeley with a Master of Public Policy and an MA in International and Area Studies with a focus on government climate change adaptation policy. Prior to that I was part of the Russia Program Team at Pacific Environment, supporting the environmental movement of Siberia and the Russian Far East. On Twitter: @stripeygirlcat